There are 45 data caches with Latent Memories in Destiny 2. When you collect 35, you’ll be able to open up a special chest with the first reward. Collect another 10, and you’ll be eligivle for another reward, hidden in another chest. The problem, aside from collecting all 45 Latent Memories, is finding the two caches. That’s why we’ve written this guide, to help you find Destiny 2 Warmind 35 & 45 cache chest locations.

Where to find 35 cache chest?

The first chest holds the Worldline Zero exotic sword. You’ll find it in the Core Terminus lost sector, in the west of Braytech Futurescape. Don’t forget, you’ll need 35 Latent Memories to open it. You can check your progress in the lower right part of the map screen.

The other chest is more difficult to find, as well as open. In order to crack it, you’ll need to collect all latent memories. That’s no easy feat. Once you’re done, head to Glacial Drift. Look for a tunnel leading south. Follow it, and it will lead you to Olympus Descent, a frozen cave system. Follow the tunnels until you reach a broken pod on the edge of a cliff. Approach the edge and look down – you should see a platform down there. Jump on it, and enter the small cave.

Be prepared to fight – an Unhollowed Vanquisher will be waiting for you. When you defeat it, you’ll have the chance to open up the Pavonis chest. Inside, you’ll find the G-335 Anseris Overdrive exotic sparrow. Apart from looking cool, it has 160 speed, which puts it at the top of the fastest vehicle list. It would’ve been nicer to get something that’s actually useful, like a new weapon or piece of armor, but free cosmetics aren’t that bad of a deal. 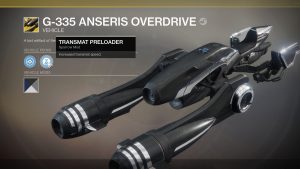