Aberdeen pig farm is one of the locations in Red Dead Redemption 2. It’s a homestead stash, a remote location where strange people live – strange people you can rob blind. They’ll let you into their house, share a meal with you and offer you some nasty drink. A lot of people are wondering what happens if you get drunk there, and where to find the stash. In this guide, we’re going to show you Red Dead Redemption 2 Aberdeen pig farm location, as well as what happens if you drink or leave.

Where to find Aberdeen pig farm in RDR2?

You’ll find the farm in the east of the map, on the border of Lemoyne and New Hanover, a bit southeast from Emerald Ranch. The house is a surprisingly nice-looking, large log cabin. Once you get there, the guy out front will offer you to take a break and dine with him and his wife. Sure, they seem extremely unsavory. They look like an old-timey version of the family from Texas Chainsaw Massacre? But, hey, maybe that’s just prejudice. What’s the worst that can happen? If you choose to enter the house, a series of events will start to unfold, one creepier than the other, leading up to the dinner you were offered.

What happens if you drink at Aberdeen pig farm in RDR2?

Once you’re at the dinner table, the pair will offer you drinks. You can turn down their offer and leave, but then you won’t find out the rest of their story, and you won’t be able to rob the stash. So, you might as well not have entered the house at all. If, on the other hand, you do keep drinking, you’ll pass out after the third shot. Yes, everything you thought was gonna happen is now happening. However, if you pay attention, you’ll hear them say where they’re stashing your money after they throw you out.

Aberdeen pig farm stash location – how to get your money back?

To get your money back from the Aberdeen Pig Farm, you’ll have to return to the scene. This is only available if you’ve decided to drink with the inhabitants of Aberdeen. After you’ve passed out from drinking, you’ll wake up in a corpse dumping ground. Make your way back to the house and look for the stash behind the old woman’s painting – the one you see as soon as you enter the house through the main door. That’s where your money, and some more on top, will be hidden. And, if you have the chance, take your revenge. 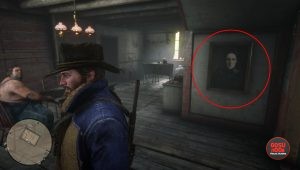