Legendary animals are enemies in Red Dead Redemption 2. They’re like befeed up versions of regular beasts – they hit harder, resist more damage, but also drop unique pelts that can be used to craft unique items. There’s sixteen of them in the game, and you’ll get a map showing their approximate locations early on. If you have trouble finding them, as the map isn’t all that accurate, you should continue reading our Red Dead Redemption 2 Legendary Animal locations guide.

Where to find legendary alligator?

Where to find legendary animals in RDR 2?

You can use Hosea’s map to get approximate locations, and the game will warn you when you’re near a legendary animal, marking its territory on your map. However, if you want to skip the part when you wander the frontier looking for epic beavers, you can use our map. 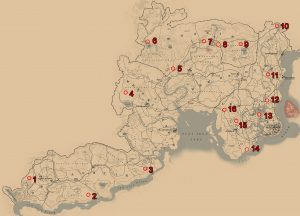 You can find this beast in Gaptooth Ridge, the area in the far southwest of the map, west of Tumbleweed (number 1 on the map above). It’s really fast and strong, so make sure you have a full Dead Eye core, some tonics, chewing tobacco and snake oil. A shot to the head from a decent long-range weapon is a great start, but be ready to finish it up in close quarters. A shotgun with some souped up ammo is necessary here, along with plenty of Dead Eye. It’s pelt can be used to craft a flap hat, riding gloves and a vest. It also drops a fang that can be turned into a talisman which increases stamina XP gain by 10%.

This one’s also in New Austin, south of Armadillo, on the banks of the San Luis river (number 2). It’s pretty much a goat, so you don’t have to worry about surviving. You do have to worry about catching up with it, though. Shooting if from a distance would be a mistake. Instead, use Cover Scent to sneak up to it, then enter Dead Eye and unload a tonne of buckshot into the poor thing. You can use its pelt to craft a coat and a pair of range gloves. Carve its horn, and you can take it to the fence, who’ll turn it into a trinket that stops animal carcasses stored on the horse from spoiling.

The Tatanka Bison can be found in the easternmost part of New Austin, east of Armadillo (number 3). Like many other herbivores, it’s not really going to defend itself. If you don’t want it to run away, though, you better make sure you have enough Dead Eye and a decent rifle. It has a pretty darn big head, so landing several headshots shouldn’t be too hard. The pelt can be turned into a vest, a pair of chaps or fowlers, while you can turn the horn into a trinket that reduces incoming melee damage by 10%.

We found the legendary buck in West Elizabeth, in the Big Valley area. It was grazing in a spot directly north of the Ovanjila lake (number 4). It’s going to give you a run for the money – be patient, mind the trees, and bring lots of Dead Eye tonic. Once you skin it, you can purchase a vest or a pair of range gloves made from its skin. The antlers can be turned into a trinket that increases the quality of animal parts you get from skinning.

The bighorn ram can appear on the edge of the west Grizzlies, by the train tracks west of Valentine, near Cattail Pond (number 5). It’s a sheep, there’s no science here. Use a Scent Cover if you have trouble getting close enough to fire a killshot.

The white bison grazes in the area in the northwestern corner of the map – specifically, on the shores of Lake Isabella (number 6). Warm clothing is a must here, a is a strong weapon with enough ammo. The beast’s not too hard to deal with, but has a lot of health. Its pelt can be used to craft a coat or a horned hat at the Trapper’s store.

We found the wolf in the middle of the Ambarino region, in the north of the map. It was by the train tracks north of Fort Wallace, in Cottora Springs (number 7). This one will fight back, so you best come prepared. It isn’t particularly beefy, but it does pack a punch, so try to deal with it before it can do damage. Start the fight with a well placed sniper shot, then switch over to a shotgun, and make sure you have something to replenish your Dead Eye with. You can use its pelt for a pair of chaps or a vest. You can also carve its heart out, and turn it into a trinket that makes you a better drinker.

The legendary elk is also in Ambarino, near the previous location. You’ll find it a bit east from Bacchus Station (number 8). Even though it has terrible antlers, it won’t use them to gore you – instead, it’ll try to run. Using a Scent Cover can allow you to sneak up to it and align a better shot. Skin it, and you’ll be able to buy a pair of half-chaps, some mokasins or a pair of gloves. The antlers can be alchemically turned into a talisman that gives you 10% more money.

This is the same bear that starts your legendary animal pursuit. After you fail to hunt it down during the quest, you’ll be able to find it in the east Grizzlies, north of O’Creah’s Run lake (number 9). The bear is quite resilient, even to bullets. If you’re conflict-averse, you can try to find a ledge it can’t climb onto in the mountains and shoot it from there. It is a dangerous predator, but its size also makes it easier to hit vital spots.

The moose is located in the northeastern corner of the map, near the spot where the Kamassi River enters the area (number 10). It might not even attack you, but it is swift, so make sure your Dead Eye is ready. Once you skin it, you’ll be able to buy a pair of moccasins, or a hunting jacket. The antler can be turned into a trinket that gives you 10% health XP.

You’ll find this little critter on the river west of the Van Horn Trading Post, in the east part of the map (number 11). You’ll see a dam nearby, which should help locate it. It’s a rodent, so killing it won’t be no trouble. Its pelt can be transformed into a flop hat or a pair of cavalry gloves. You can also pull out its legendary tooth and make a magic amulet from it, which will decrease the speed at which your weapons degrade by 10%.

The wild pig resides in Bluewater Marsh, the swampland north of Saint Denis (number 12). Some say it didn’t even attack them, the others almost lost their lives hunting. Best be prepared – a weapon with some stopping power and a flask of anything that aids your Dead Eye will do the trick. Its pelt can be used for a pair of fancy fowlers, and its tusk slowls down the health and stamina draining of your mount.

The bullgator only appears after you’ve completed a certain quest, and can be quite an adversary (number 13). We’ve written all about it in our legendary alligator location guide (linked near the top). Its hardy skin can be used to make a gambler’s hat, a vest or a pair of fowlers.

The giaguaro only shows up once you have rank 9 in the Master Hunter challenges. It will appear on the southern tip of Lemoyne, east of Braithwaite Manor (number 14). It can kill you with one hit, and it’s pretty fast, so make sure your Dead Eye is up to snuff (tonics, enhancers, etc.). It’s similar to the cougar, only stronger. Use a Scent Cover to mask your smell, and be sure to wear headphones if you have a pair – it’s possible to hear it before you see it, and the fraction of the second here can mean the difference between life and death.

The fox lives in Lemoyne, near Mattock Pond, north of Rhodes (number 15). Like with all the other small animals, the element of surprise is crucial here – if it spots you, you probably won’t have time to take aim and kill it. Use a Scent Cover, sneak about and make sure you hit it with your first shot. Skinning it will net you a pair of nice moccasins, and you can use its claw for a trinket that gives you five more seconds of Dead Eye.

The coyote lives in the northern part of Scarlet Meadows, in Lemoyne (number 16). It’s a fast beast, one that also shies away from conflict, so make sure you sneak up on it and down it in one shot. Its pelt can be used to craft a mountain hat.

The game will introduce legendary animals during chapter 2, when Hosea takes you on a hunting trip. You’ll look for a legendary bear, which is only one of the sixteen beasts you’ll need to conquer. After that, she’ll give you her map and send you on your way. You’ll have to slay at least five of these for a completion bonus, and you’ll have to hunt them all down if you want to get the two trophies associated with them and their compendium entries.

Legendary animals are extremely hard to find. Just a few of them can be found during story missions, like the Legendary Bharati Grizzly Bear and the Legendary Bullgator, while others are scattered throughout the world. The game will always notify you when you enter a Legendary animal’s territory. You will have to find three clues before the trail leads you to the animal. All legendary animals are unique, and you can defeat them only once. The bow and arrow seem like the obvious choice here, but the pelts themselves are damage resistant, which means you don’t have to worry about ruining them if you use firearms to kill the beast in question. Make sure you bring enough Dead Eye tonics or other consumables that help regenerate it, because you will need them.

Where to find Trapper and what to do with Legendary Pelts

If you kill an animal and fail to get the pelt, don’t worry – you’ll find the lost skin at any trapper’s shop, which is where you’ll have to go if you want to fashion these animal parts into something remotely useful. The first place where you should look for a trapper is his base in Saint Denis. There are also four other locations where you can find him. Trapper offers you to craft special cloths from animals pelts.