After a couple of days of releasing teaser images and stirring up the fanbase, Rockstar Games have finally gone ahead and officially announced Red Dead Redemption 2. Their thrilling Wild West saga is getting another sequel, although we’ll have to wait a fair bit before we actually get to play it. 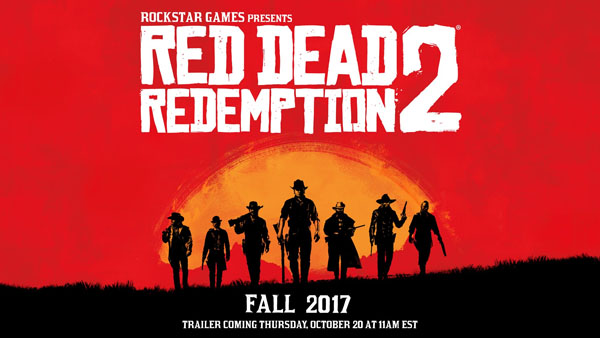 Following a couple of cheeky teases, the famous developer has published a blog post with the image above. The game is planned for released sometime during fall 2017. More importantly (at this point, at least), they’re going to release the first trailer on October 20th, at 11 AM EST. It’s probably not going to contain actual gameplay footage, as these things rarely do, but it’s still an exciting prospect.

Here’s the awfully brief description they posted along with the picture:

An epic tale of life in America’s unforgiving heartland, the game’s vast and atmospheric world will also provide the foundation for a brand new online multiplayer experience.

This doesn’t tell us much, except that there’s probably going to be a Red Dead Online at some point. Get ready for horse races, saloon brawls and high noon duels. As you might have noticed, there are seven characters in the picture. Our theory is that they’re all going to be playable. Rockstar wouldn’t possibly go back to having a single protagonist, after having three turned out to be such a success. Five would be the obvious next step, but they’re going to go just a bit further and make it seven.

The sad news is that it won’t be coming to PC, at least for now. It might end up getting there later, like GTA 5 did, or it might end up never happening, like the previous Red Dead game. Only time will tell. For now, though, it’s only confirmed for Playstation 4 and Xbox One.

NEXT POSTHow many players – BF1