Mastercrafted Wolf Gear is the final upgrade for Wolven swords and armor in The Witcher 3. It was part of a free DLC. If you want it, you first need to go through the basic Wolf School Gear, Enhanced Wolf Gear and Superior Wolf Gear. You have to be at least level 34 if you want to use these items. In this guide, we’ll show you how to find diagrams for crafting the Mastercrafted Wolven Gear, the stats of the items and the materials you’ll need to make them.

Head toward the southeastern part of Velen. There is a hidden treasure just northwest of the large Nilfgaardian Army Group, southwest of the Kimbolt Way fast travel point. This area is guarded by a lvl 22 Fiend. If you don’t want to engage it in combat, wait until it is a bit farther from the bodies closest to the wooden hideout. Loot the Bandit’s key from one of the two bodies that are next to each other and unlock the bandit’s hideout. The chest with the Mastercrafted Wolf Diagram piece is inside.

We are still in Velen, this time in the southwestern part of the map. Go east from the Byways fast travel point. You should spot stone stairs with two large statues that lead to the animal shrine. Just next to these stairs is a small, round well. Inside it, you should spot a rather tiny chest. This is where the Mastercrafted Wolf Armor is located.

There’s a Spoils of War POI in southwestern Velen, south of Condyle and west from the Byways fast travel points, a bit farther from the coast. Dive into the water and head into the ship’s hull through the entrance close to the bow. The chest with the diagram is just under the stairs that lead below deck.

We are now at the main Skellige Isle. You can find small stone ruins close to its center, northwest of Boxholm and east from the Fayrlund fast travel point. This area is guarded by the strong monster Morvudd. The chest with the diagram can be found on the stone wall, next to the largest stone structure in this area. You can try to avoid combat with the monster by approaching from the nearby road and jumping onto this wall.

There is a large island in the southwestern corner of the Skellige Isles map. In the eastern part of this island, east from the Dorve Ruins fast travel point, is an area infested with level 13 devourers. There’s a rather tall stone tower in the southeastern part of these ruins. Find the side with many windows and a dead plant crawling up the wall. The Mastercrafted Wolf Boots diagram is located at the bottom of this side of the tower, next to the small stone wall.

We are now at the farthest northwestern island of the Skellige Isles map. In the southwestern part of this island is a fast travel point called Old Watchtower. Climb on top of the wall, just above the entrance to the Watchtower, to reach the chest with the diagram.

This is a level 34 set of medium weight armor and weapons. You can see all the differences (marked green) between this and the previous set – Superior Wolf Armor – in the picture below . Upgrades for basic stats go in range from 1% up to 7%. Weapons now give 10% critical hit chance, their damage is also higher by 50 for the silver and 40 for the steel weapon. Armor gets boosted by 10 and 25 points. 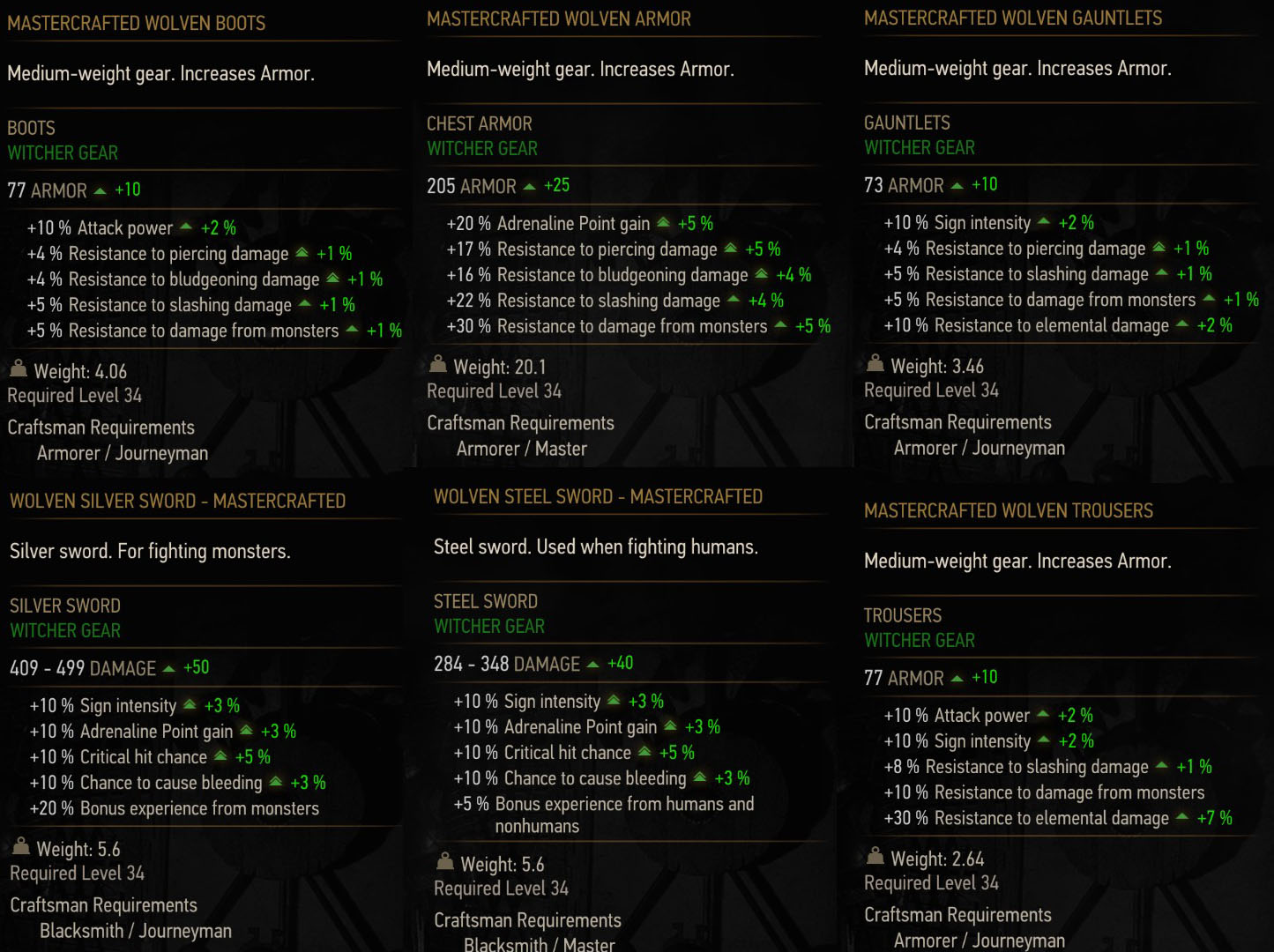 Once you gather all of the materials, head to the master armorer and weapon crafter. Items like Armor and Steel Sword require the master blacksmith and armorer for crafting.