Secrets, puzzles and easter eggs are a big part of Borderlands 3. Gearbox Software love peppering their games with rewards for exploring hidden places. Sometimes they come in the form of pop-culture references, other times they’re just plain old loot. Either way, they are almost always accompanied by tiring double entendres. If you’re wondering where to find all the Borderlands 3 secrets, easter eggs & puzzles, this guide will show you where and what they are.

The orange gem doors have become the game’s most popular secret. They’re locked, and no amount of effort will open them – people have tried collecting all the Eridian Writings, solving all the side missions, getting 100% completion on a planet – nothing works. As far as we know, they’re present in Ascension Bluff and Konrad’s Hold. The current ruling hypothesis is that they lead to arenas that are going to be populated with bosses in future DLCs. 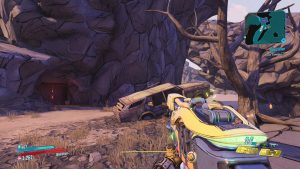 There’s a big box next to the computer in Tannis’ lab. On the front face, there are four buttons, divided in two rows. Pressing them will change the way they light up, with varying numbers of green and red lights. People have pressed them in all the possible ways, and nothing seems to happen.

There’s a unique enemy in the underground part of Lectra City. He’s called One Punch and can kill you with one punch, which is obviously a reference to One Punch Man. He can drop a legendary weapon called One Pump Chump. In order to get to him, you’ll have to solve the Lectra City underground screen puzzle.

There’s a particular bookshelf in the Archives at the Jakobs Estate. On that shelf, there’s a human skull on a book. When you approach it, a pop-up will tell you it’s locked. It’s actually a secret door that leads to a room with loot. In order to open it, you’ll have to solve the skull statue bookshelf puzzle. 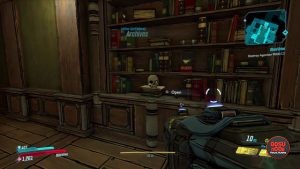 Rhys will remember this

At the very end of the Atlas at Last mission, you’ll get to tell Rhys what you think of his moustache. He’ll either keep it or shave it, depending on your answer, and you’ll get different trinkets and an achievement. When you pick your choice, a message will pop up telling you “Rhys will remember this”. This is a clear nod to Tales from the Borderlands, the Telltale game in which he debuted. 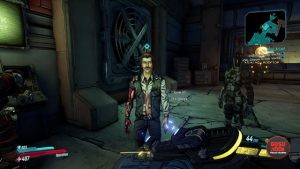 There’s a locked door after the Mouthpiece boss fight that has been puzzling a bunch of folks. It was though of as a secret for quite a while, and new players might mistake it for one as well. It turns out the door is unlocked during a side mission at a later point, so it’s not that secret really.

The first legendary hunt you can take on, the one in the Droughts, pits you against a unique varkid called Lavender Crawley. It’s a not-so-subtle reference to Violet Crawley, the matriarch of the family in Downton Abbey, which only becomes more apparent as the beast splits into various other Crawlys, all with distinct and dashing clothing items.

There’s a side mission called Killed Dinklebot, which will take you to Skywell-27. You’ll have to defeat a flying robot reminiscent of Destiny’s ghosts, and he’ll drop a loot-o-gram. Take that to Crazy Earl at the space ship, and he’ll give you a terrible weapon. It’s funny if you aren’t a dedicated Destiny player, but if you are, it probably stings quite a bit.

A nod to the favorite TV show of true intellectuals the world around, this bounty (available from the notice board at Sanctuary) will lead you to Lectra City. You’ll have to destroy the duo, which comprises of a tall, lanky character with light blue spiky hair, and a shorter one that has a yellow shirt. They use green portals to travel around the arena.

When you’re at Anvil, head into the sewers in the southwest of the map. The area is called West of Gross. When you reach the final room, you’ll be ambushed by a woman and three dragons. Her name is Mother of Grogans, The Uncorroded, Queen of the Sewer Kingdom.

There’s a laser-guided rocket launcher in Borderlands 3, that behaves exactly the same as the HECU launcher in Half-Life – it allows you to guide the missiles by hand, after firing them. It’s even called Freeman. You can get it as a drop from the Warden, the boss at the end of the Anvil map.

Ever since the game was released, everyone kept asking what the deal was with the giant floating cube in the middle of the map at Desolation’s Edge. Turns out it’s a fabricator. As it rotates, shoot the side panels with different types of damage – when you shoot a panel with the correct damage type, it’ll light up. Once all of them are glowing, the cube will drop a bunch of loot on the floor – money and weapons.

This one’ll be familiar to all the people who’ve played the previous Borderlands games. In order for it to show up, you need to go to the southernmost point in Ambermire. While standing on the shore, you’ll see five barrels nearby. Shoot them, and Tannis will appear in a fishing boat. A school of fish topples her vessel, and she mounts one of them, riding it off into the sunset while fireworks go off. We’re not sure if you’re supposed to shoot the barrels in a specific order, but here’s the order we shot them in, just in case.

There’s a certain grenade in the game that just blows up in your face and sets the area you’re in on fire. It’s called the Burning Summit, and we’ve seen people receive it in the mail from Tyreen. Players following the CS:GO scene might appreciate the easter egg – it’s a reference to a tournament moment where the last man standing in the winning team killed himself in the last seconds of the match by accidentally walking into the flames caused by his own Molotov cocktail.

We’re going to update this guide if we run into any more secrets, easter eggs or puzzles off the beaten path. If you know of one we’ve missed, do let us know in the comments.