As part of its 30th Anniversary Event, developer Bungie has released some Halo-inspired weapons and other content. This is to celebrate the fact that they have been in business for over three decades, during which they developed not just Destiny 1 and 2, but also the first several Halo games. Getting your hands on these weapons isn’t exactly hard, but it does require some work and know-how. That is why we have written this How to Get Halo Weapons in Destiny 2 guide to help you find and acquire all of these weapons. 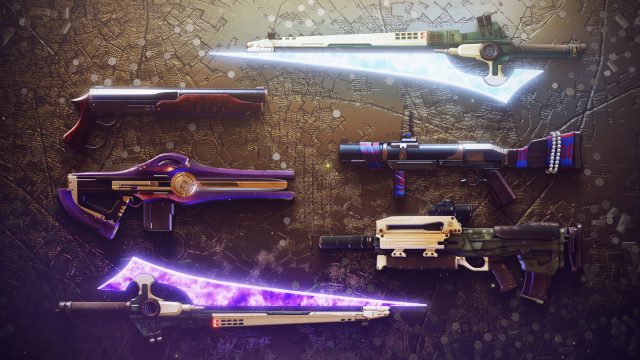 How to Get the Halo-themed Weapons in Destiny 2

These weapons are free, and anyone can get them. All you need to do is to play Dares of Eternity and earn Treasure Keys from doing so. If you want to get all of these weapons, best get ready to do some farming and get a whole bunch of Treasure Keys. This is because the weapons you get are completely dependent on RNG. So, after you’ve farmed enough Treasure Keys, go to Xur’s Treasure Hoard. Once you are there, you will see a white chest at the edge of Xur’s platform. Interact with it to use a Treasure Key to open it.

Each time you open the chest, you will spend one Treasure Key, and get one of the 30th anniversary weapons from it. They are a guaranteed drop, so you can repeat this process if you want to get better rolls. Although, this isn’t the only use for the Treasure Keys, as other chests there contain armor ornaments for the three Destiny 2 classes, so you may want to spend the keys on these chests, too.