Treasure hunter trophy is one of the achievements in God of War. It’s a silver trophy, and in order to unlock it, you’ll have to find and solve all the treasure maps. This means finding the scrolls, figuring out where the clues and drawings point towards, and finally, discovering and looting the dig spots. There’s around a dozen maps, and only a few are actually easy. No worries, though – our God of War Treasure Hunter trophy guide is going to help you with that, by showing all the map locations and solutions.

Hunter’s Kingdom was the first map we found. You can snatch the scroll from the cliff at the Lookout Tower dock at the Lake of Nine. The image you’ll get is pretty clear, so it’s mostly a question of getting to hte place for the first time. It’s in Veithurgard, the next area to the east. You’ll need to take on a particular Wayward Spirit quest in order to get there. We’re written about it in more detail in our Hunter’s Kingdom treasure map guide. 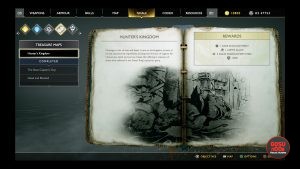 Finding the scroll is most of the work here, as it’s hidden deep within the Volunder Mines, southeast of the Lake of Nine. The drawing is a dead giveaway for the dig spot if you’ve already been there. If not, be sure to check out our Dead & Bloated treasure map guide for detailed instructions with screenshots. 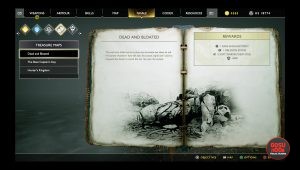 The name implies this has something to do with boats, but that’s not really helpful – the lake is littered with boat carcasses. You’re bound to run into the parchment when you visit the Stone Falls dock, but figuring out where the dig spot is will be a bit harder. Luckily for you, we have a guide that’ll help you find the Boat Captain’s Key treasure map location. 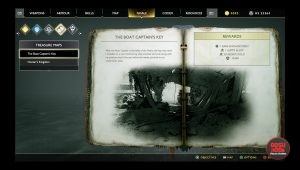 The name is pretty telling – don’t blink or you’ll miss this one. Once you’ve got the scroll from Fafnir’s Storeroom, you’ll have to stay vigilant until you find it. You’ll pass right by it during one of the main story missions – you can return later and get it, but if you want to save time, take a look at our Don’t Blink treasure map guide, which will show you exactly where to look. 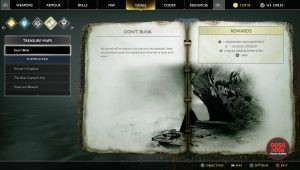 You probably won’t have much trouble finding this one after you’ve seen the drawing. However, you’ll have to jump through quite a lot of hoops before you find the scroll in the Witch’s Cave. If you need help with it, head on over to our Turtle’s Tribute treasure map solution guide. 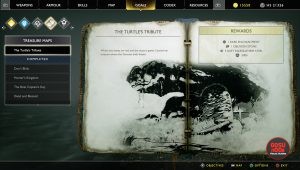 This scroll is so easy to miss that it’s not even funny. Seriously. It’s hidden away in the Landsuther Mines, but don’t be surprised if you’ve passed by it while exploring the tunnels. The clue might clearly point to the location of the dig spot, but getting to it can be quite challenging. For more info and step-by-step screenshots, check out our Kneel Before Thor treasure map guide. 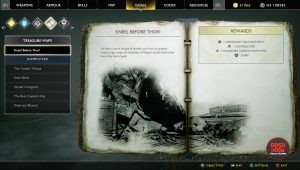 You’ll find the scroll at the Iron Cove, but getting to the dig spot might be an issue. The hint will tell you where to look, but you’ll have to solve a puzzle and defeat some nasties before you can loot it. Our Creation Island treasure map guide will show you exactly where to go and what to do when you get there. 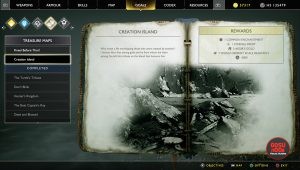 You’re bound to run into the parchment if you ever visit the Ruins of The Ancient dock at the Lake of Nine. The picture on it is quite revealing, and the hint mentions Fafnir’s Storeroom by name, so it shouldn’t be too hard to figure out. Still, if you’re not one for this kind of challenge, you’ll probably find our The Historian treasure map guide helpful. 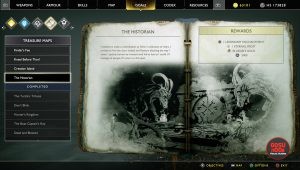 The scroll for this one is in the Forgotten Caverns, a location off the shore of the Lake of Nine. It can be missed, but getting back and grabbing it is easy enough, as it’s near a fast travel point. The treasure, on the other hand, is in deep within the Northri Stronghold. It’s not a place you’ll visit much, so you might have trouble comprehending the hint and recognizing the locations from the drawing. If that is the case, be suer to check out our Finder’s Fee treasure map guide. 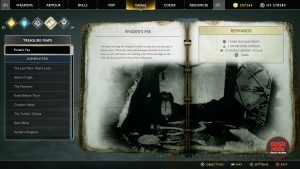 This one starts when you pick up a scroll from an unimpressive, rarely visited beach on the Lake of Nine. It will take you to the Light Elf Outpost, an island housing a labyrinth, in the northwest of the lake. Finding your way around the maze of corridors, gates and light bridges can be daunting, which is why we’ve written a detailed Island of Light treasure map guide. 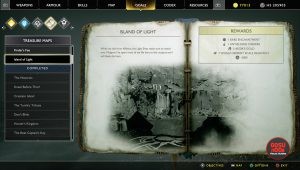 The last place “they” would look is probably among the last places we would look, too. The scroll is obvious enough – unmissable, even. The dig spot, however, is hidden away in a place you won’t visit during the main story. You might miss it completely if you’re not one for exploring. If you get stuck on this one, we suggest you consult our Last Place They’d Look treasure map screenshot guide. 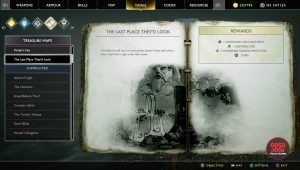 The Njord’s Oarsmen is fairly well-hidden treasure map. It’s stowed away safely in a longship in the middle of a cave which you can reach from the Lake of Nine. The solution isn’t too hard to find, as the location it leads you to is incredibly obvious, but you’ll very likely miss the map itself if you’re not thoroughly exploring. In case you need help with this one, check out our Njord’s Oarsmen treasure map location guide. 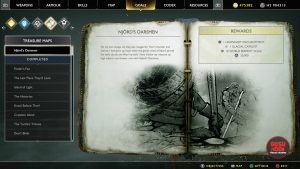